Museum and Cultural center in the South East of Iceland – Thorbergssetur

Thorbergur centre of culture in Hali in the district Sudursveit of Southeast Iceland.

In the Thorbergur centre is a fully licensed Restaurant. We offer you coffee, homebaked cakes and our specialities such as the farmraised arctic char (trout)from Hali as well as other traditional local food like gourmet Icelandic lamb and traditional lamb meat soup with bread.

Thorbergur centre is closed until 15th of April 2021.

A note about the author

Þórbergur Þórðarson, essayist, parodist, lyric poet, folklorist, autobiographer, storyteller, polemist, is a great and original writer who evades simple classifications, because, ultimately, his distinction rests on a unique personality. During his career he has attempted a good many subjects, including theology, theosophy, linguistics and especially politics, almost infallibly achieving great polemical virtuosity and stylistic successes. But, again and again, he has returned to the autobiographical writings which may be said to form the core of his work. These have not followed a fixed pattern, appearing sometimes in bookform of more or less novelistic design or as episodes inserted among his other writings. The story which appears here in English translation, forms a part of an autobiographical work called Íslenzkur aðall (An Icelandic Aristocracy) which covers approximately one year of the early life of the writer as a speculative vagabond and day labourer. This book was first published in 1938.

Þórbergur Þórðarson was born in 1889, on a farm in the district of Suðursveit in the far southeast corner of Iceland. Much of his early life was spent in a rather haphazard search for means of livelihood: he was at the various times a fisherman, a day labourer and a starving bohemian in Reykjavík. Having received little or no formal primary schooling, he was nevertheless consumed by varied and often contradictory intellectual aspirations. For a number of years he attended lectures on Icelandic language and literature at the University of Iceland and enjoyed small stipend for the study of dialectal words. At that time it appeared that he might devote himself to the study of language and folk culture. But the spiritual hunger and the mysticism which is one of his persvasive characteristics as a man and a writer turned him also to the study of oriental philosophy, theosophy and spiritualism. He became a practitioner of yoga. But, at the same time his rational and scientific bend was increasingly directing him towards the study of social problems and so he became a lifelong socialist. This conversion found a brilliantly kaleidosocopic expression in his first major work, Bréf til Láru (Letter to Laura, 1924). With this work his future as a writer was determined and the predominant strains of his future writings made clear.

Earlier, he had published some highly personal essays as well as two small volumes of poetry, combined together in a third volume Hvítir hrafnar (White Ravens, 1922). Aside from a few personal lyrics of high quality, these poems were mostly irreverent and raucous parodies of the romantic and melancholy poetic fashion of the times. They express the author’s contempt for sentimentality, vagueness and conventional acquiescence as well as his penchant for self-mockery. For Þórbergur Þórðarson was himself a highly romantic man when it came to love at least he knew better than anyone the painful sweetness of selfindulgent melancholy as the present translation from Íslenzkur aðall shows. He himself had written some conventional poetry in the style of the times. But he was also a born rationalist with a scientific turn of mind and an innate need for relentless self-observation. What he saw struck him as highly amusing and when he began to exploit his personality and experiecnes in writing his readers found it perhaps even more amusing than he did himself. At his best he gives the distinct impression of not knowing how funny he is. For if he belongs in any class at all as a humorist, it is with that rare breed of artists known as grand naifs.

Not that his humor is unconscious; to the contrary he exploids it with great artistic virtuosity. But it is essentially a kind of exaggerated or excessive sanity that strikes the possessor’s or ex-absurd. It means dealing with experience at what appears to be an abnormally and absurdly close range, overlooking any accepted and general solution to even the minutest of problems. It pursues the analytical process ad absurdum, thus achieving a double fun by mocking both the object under observation and the analytical attitude itself. It is both an example of approaching a problem with a fresh eye and a more or less unconscious parody of the „fresh eye“. For, if Þórbergur Þórðarson, the polemical and political writer, is a relentless critic of conventional values as well as an unflinching defender and proponent of a pristinely naive rationalism, then Þórbergur the autobiographer and artist consciously and unconsciously gives both sides their due. His autobiographical protagonist, the grand naif, the truth-seeking rationalist is, to be sure, in his whole existence a living criticism of his fellow beings and a constant threat to their conventional way of life, so to speak. But most of his comic misadventures stem not from his rationalism but from his romantic and irrational follies. In that way the author identifies himself most profoundly with his fellow men and therein lies the greatness of his art. But a good deal of the fun in these works rests precisely in these scenes when the protagonist discovers the value of conventional attitudes as a means to rational action. Still, he is, by nature, doomed to remain an outsider. Perhaps the best definition of his predicament is to be found in the title of one of the autobiographies, Ofvitinn (1940-1941). It means something like „the fool genius“ or, perhaps better: „the simpleton by reason of his gifts“.

It is far beyond the scope of his brief note to try to assess the whole range of Þórbergur Þórðarson’s work, least of all his voluminious polemical writings, or to try to explain his profound stylistic importance in Icelandic literature. A simple enumeration of the titles of his books would have little values. But it is to be hoped that the present translation will stand up as a not unworthy sample of his writings. Perhaps it may also mark the beginnings of large scale translations into some of the major languages of this great and extraordinary writer. 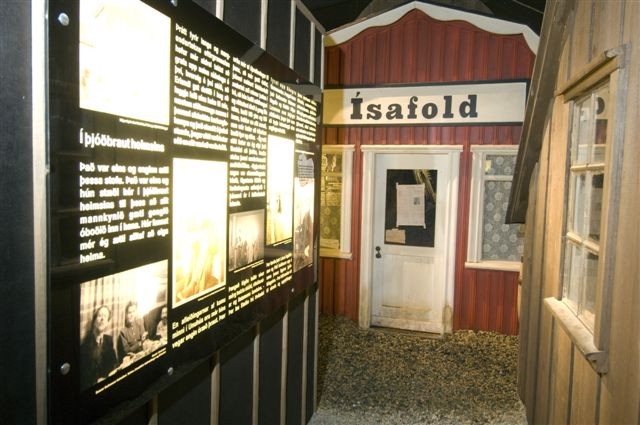 The Þórbergur center is a cultural center with an exhibition dedicated to the great writer Þórbergur Þórðarson (1888 – 1974) ) who grew up on the farm Hali, situated on the ring road near Jökulsárlón, the famous iceberg lagoon in the South East of Iceland.  It is one of a number of ‘new generation’ museums that have sprung up in Iceland over the last few years to provide an interesting and informative alternative to the local history, maritime and turf farm collections. The center occupies a prominent purpose built site, easily visible from the road, with its eye-catching row of 2meter high book spines that line the side of the building.

The first of its kind in Iceland, this unique exhibition takes you on an enriching journey through the life and thoughts of one of Iceland’s most original 20th century thinkers and writers.
Also exhibited are photographs from a world now vanished from Suðursveit, faint reminders of a bygone area which show the community’s working and social life between 1930 and 1960.
“Brilliant – a beautifully crafted journey of cultural discovery” said one of our guests

In the realm of Vatnajökull in the South East of Iceland you were  “cut off from the world” before 1960.

Let’s go back in time to the period of 1930 to 1960. The inhabitants south of Vatnajökull glacier lived in isolation; they mainly made a living through subsistence farming, supplemented by fishing. Countless glacial rivers hindered travel between communities. Above the settlements were awesome mountains and the mighty Vatnajökull, Europe’s largest glacier, below was the turbulent Atlantic, where waves crashed onto a harbourless coast. Not until after 1960 were the most difficult glacial rivers bridged in the South East of Iceland, –  in the year 1961 Hornafjarðarfljót to the east, – in the year 1967 Jökulsá, running out of Jökulsárlón, – in the year1974 Skeiðará (closing the last gap of Ring Road No. 1).

Until that time, visitors were rare in South East of Iceland which remained isolated from the outside world. Those living there conducted their struggle through life with an undaunted diligence. A great deal of spirit and a good knowledge of nature and local conditions were necessary to survive – living in this environment was often difficult, and took its toll.

The everyday challenges in the South East of Iceland residents involved seeking sheep in the mountains, saving them from cliffs, fishing on rowboats in the sea or for trout in rivers and lakes. Gathering enough hay to feed the livestock through the coming winter was crucial, for people’s lives depended on the weather and wind and what they were able to achieve on their own. Mutual help and solidarity were hallmarks of this unusual culture. 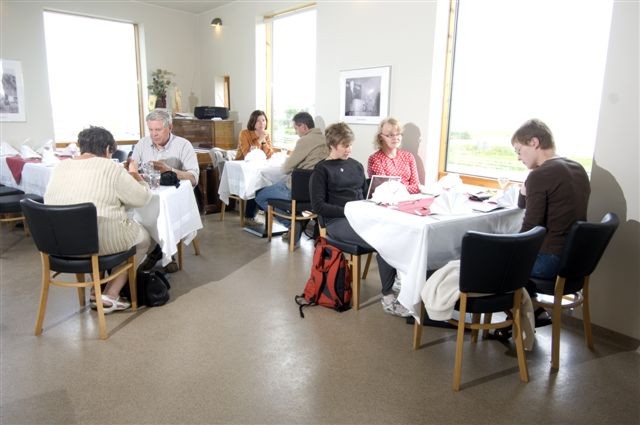 Our fully licensed restaurant is located in the cultural heritage center at Þórbergssetur, with seating for over 60 guests. Daily menu, offering our specialities such as the farm-raised arctic char (trout) as well as other traditional Icelandic food. Ideal facilities for meetings or smaller groups. From 1st of July to 1st of September the restaurant offers a buffet including traditional local food, soup, starters, arctic char, lamb and dessert at a reasonable price.
During the wintertime  dinner reservations are necessary.

From October to April the restaurant and the museum are open from 12 pm. to 17 pm. all days except Monday. Visits outside normal opening hours can be arranged with us.